Kurama
The Marines are the World Government's military sea force, tasked with law enforcement, international security and military operations. The Marines are one of the three great powers, alongside the Shichibukai and the Yonko.

They are present in all the seas around the world, as evidenced by their branch offices. The focus of their assets is on the far more dangerous Grand Line. 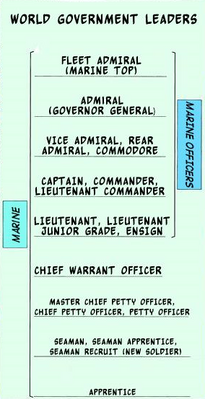 The Marine Bureau Law (海軍 局中法度, Kaigun Kyokuchū Hatto) are eight regulations that are considered to be the most significant in establishing a disciplinary framework for the Marines. They were written in conjunction with various Admirals, Vice-Admirals, and other officers, and was eventually codified into Marine law by Fleet Admiral Kurama roughly ten years ago. Violating any of these regulations is seen as a capital offense and often prompts severe consequences.

1. Above all, our mission is to save people. To bring peace and balance to the world. Nothing goes before this; not loyalty to our friends, family, superiors, not even our own lives. To choose one's own attachments over the greater good is to betray everything we stand for.

2. Saving the ones within your means takes precedence over anything else. Better a hundred criminals be permitted to run free than one innocent be made to suffer. Better we save a single child than capture a thousand pirates. If blood must be spilt, it must always be for the sake of the greater good. If the death of one will save a hundred, then we must be prepared to shoulder that burden.

3. To abandon the organization and desert our ranks without the proper clearance is to be considered a criminal of the worst degree. Beyond even the pirates, who maintain honor among thieves, and the revolutionaries, that are willing to throw the world into chaos to get their way, such a deserter is to be considered the worst sort of person. They are not even considered worthwhile as a resource, and are to be killed without question.

4. In the event that the Fleet Admiral is absent, then the power to lead is transferred over to the senior Admiral, and all Marines are to follow their orders. The senior Admiral, in question, refers to the Admiral who has held the office for the longest duration among all present Admirals. If neither the Fleet Admiral nor the Admirals are present or fit to lead, power of authority is transferred over to previously designated Vice Admiral(s).

5. Personnel conspiring with the enemy shall be punished. The 'enemy' is defined as any individual, organization, or nation that goes against the peace and balance of the world and holds their own wishes above that of the greater good. As such, anyone fitting this description is the natural enemy of the Marines.

6. Do not use the name of the Marines nor your rank within the organization as a means of settling personal fights and disputes, nor to gain personal favor or reward that does not benefit the organization as a whole. All we do in the name of the Marines, and the World Government, is to serve the greater good. Similarly, involving other Marines into personal fights not associated with our mission is to be considered equally criminal.

7. Lower-rank Marines are not to question or initiate aggressive action toward the higher-rank Marines. If a lower-rank officer believes their superior to be in breach of the regulations that govern our organization, or acts in opposition to our collective wishes, these are to be filed as complaints with the proper office and will be reviewed with the utmost urgency and discretion by the Admirals themselves.

8. All Marines have a responsibility to hold themselves to the regulations of our organization, as well as holding their fellow Marines to the same standards. If these regulations are ever broken by a Marine, it is the duty of all Marines to arrest the violator and hold them to account for their crimes. Marines are to be treated innocent until proven guilty, and are to be judged by a jury of their own Marine peers. If they are found guilty, a punishment fitting the nature of the violation will be issued by the Fleet Admiral.

Under Fleet Admiral Kurama, several programs were proposed and put into place in order to provide a greater service to the various nations allied under the World Government. These services include;