Seven Warlords of the Sea

The Shichibukai, the full title being Oka Shichibukai (王下七武海,, Ōka Shichibukai?, lit. meaning "Royal Seven Military Seas"), are seven powerful and notorious pirates who have allied themselves with the World Government.

Shichibukai are infamous for their adventures and accomplishments in the Grand Line, and thus possess an enigmatic power over those who sail the seas, serve the military, or live ordinary lives. They are a chaotic group known for their jaded view of the world, selfish desires, and abuse of military power, which attributes to being acknowledged as Government Dogs.

The Shichibukai is an organization of seven pirates turned privateers in the service of the World Government. Although they work for the World Government, the Shichibukai themselves typically do not care about nor respect the Government or even other Shichibukai, and are often considered by the Marines to be no different from any other pirate. On the other hand, they are known as "government dogs" and are despised by other pirates, but are still feared and respected for their infamous reputation and strength which they gained before, and even after they become Shichibukai. The Shichibukai seem to be a mixture of the more chaotic Yonko and the more orderly Marines. The majority of the Shichibukai are composed of New World veterans; those who have met the Yonko or even fought against them.

There is an enormous range in the bounties between the members due to differences in circumstances under which they were recruited. However, these are their former bounties, and do not represent the current threat they could achieve as active pirates. The terms that the Shichibukai are on with each other is best described as very unstable. They have very little (if any) respect for each other and will for the most part not accept help from one another, apparently due to a firm sense of pride. During the meeting of the Shichibukai where only two members are absent, it was stated that the very notion of them working together as a team is entirely unthinkable. However, there are certain relatoinships within the Shichibukai ranks which overpower this sense of pride. Most of the Shichibukai have a jaded attitude of the world, as their vast amounts of experience have disillusioned them.

A pirate may choose to join the Shichibukai if a space becomes vacant (which means that at least one Shichibukai must resign or be expelled from the group. However, in order for one to become a Shichibukai once this position opens up, one must be able to exhibit their strength against other pirates while choosing to pledge loyalty to the World Government (this ironically encourages pirates to gain infamy to become a Shichibukai) by making a pact with the Gorosei. If the pirate in question can be used as intimidation, the position may be offered to them, if no other pirate has accepted the position or proven to be more of an asset to the World Government. As expected, most members were already notorious pirates with high bounties, but even relatively unknown pirates can be admitted if they accomplish a feat to prove their strength. The World Government can also be blackmailed into giving the position.

They do not express open defiance to the authority of the World Government, but are not obligated to follow its orders either. They are technically only allowed to attack other pirates, and must also compensate the Government with a portion of their plunder, although this regulation is not followed most of the time. Each member of the Shichibukai must also have strong intimidation skills and a fearsome image to put off others becoming a pirate and make them fear them. In addition, it can be assumed that once someone becomes appointed to the Shichibukai they must be undefeated to maintain their position, or at least are not allowed to have a widely known debacle or scandal that affects their reputation.

Some of the members do various tasks for the government, such as conquering new islands for the World Government (described as "liberating") and protecting nations, but their ultimate purpose is to keep other pirates in check. Most importantly, the Shichibukai provide assistance to maintain the balance of The Three Great Powers.

In exchange for these services, the Shichibukai are pardoned for their former actions and any existing bounties are rescinded.

As the Shichibukai are no longer outlaws, they can make money through legitimate business, as well as bounty hunting. Some, however, are content to simply float around the sea on their ships. The government does not seem to mind, and the Shichibukai are granted a great deal of autonomy in how they operate, at least thus far. Other benefits include access to resources normally out of bounds to normal citizens and pirates, such as the use of Seastone equipment. The privilege of protection and pardon extends to any of the Shichibukai's subordinates,

Even if they violate the law, the World Government and Marines may choose not to take any notice. Because of the risk involved with maintaining the Three Great Powers, the Government tolerates the illegal activities of any Shichibukai and attempts to protect them if possible (or at least maintain their fame).

That is not to say they would not dismiss a Shichibukai for such actions. There are several Shichibukai who have been dismissed from their positions for several reasons. Dismissal from the Shichibukai holds not only the individual's loss of title, but in cases also the breakdown of possible politics affiliated to the Shichibukai. 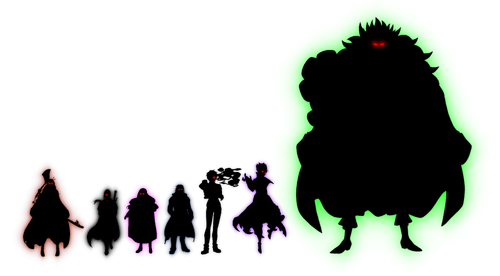 The current Warlords with their heights scaled.