Me being the guy that I am, I've always kept it in my best interest to keep an eye out on all that happens around the site. And well, one thing that's always stood out to me, naturally as it should, is a character's infobox.

In retrospective, a character's infobox image is among the very first things a person viewing your article will look at; it is the eye catcher, so to speak. So it goes without saying that the image you choose to keep inside of that infobox is rather important, whether you choose to admit it or not.

Per usual, these are not regulations per se, but keep in mind that whatever is inscribed in these blogs is what mandates our standard. In that regard, everything mentioned here is highly encouraged: consider this a piece of advice on how to make your article look even more spiffy than it already is.

That being said, I don't want anyone to take this blog lightly. No, I'm taking time out of my day to write this for a reason. So at the very least, I expect all of you reading it to be considerate to what is written here.

Without further ado, let's dive in.

This is a hidden rule that's existed for eons. The "bros before hoes" mindset, that same unspoken code that prohibits you from going after your brother's ex-wife. It's just a really dirty thing to do, isn't it?

If someone has gone the extent of making an impactful character here on our site, and they just so happen to be using a character from another series to portray that character, please respect that and consider that representation to be retired.

In other words, if Naruto has been taken by a user to portray their Yonko, you really shouldn't be using Naruto as the image for your rookie pirate's infobox. It's common courtesy to honor what they've done for our site.

Now that's not to say that you can't use Naruto to portray your character when another user made a character with his face 2 years ago and edited that page once. Use your heads, guys, we're not idiots here.

Now this is the most important part of the blog. I can't say how many times I've clicked on someone's article and cringed at their choice of an image for their character's infobox.

Remember guys, our goal here is to be as similar in structure and format to our mother wiki, One Piece Wiki. What that entails is that we literally model our pages after their own. So let me ask this of you; really challenge yourself to use 0.1% of your brain here. We're going to play a game. A game I like to call "What's the Better Image?" 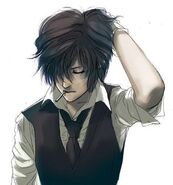 The better image here is Image 2. Did you get it right? I hope so!

Now let's delve into why it's the better image. For one, the first image simply lacks a background; the style of art is something of a watercolor sketch, which ultimately makes it seem far less official than say, the image to the right. And no, I'm not saying you can't use fanart; keep in mind that all the images I use for my characters are created by me. Just the style of art you choose to use is as vital as what's written on their pages.

If you can't tell just by looking at their thumbnails, go ahead and click on each image. They're both the same image, just of two variations in terms of quality and clarity. You'll find that by comparison, Image 2 is more clear, the larger image, and overall, the better picture. Image 1 is saved in the "jpeg" format, which derails its quality some. Image 2 is the far better choice.

My point here is that at times we fall in love with some pieces of art so quickly that we don't bother to check and see if we can find a better version of the same image. If it's on the internet, chances are there's more than one location where you can find it; all it takes is a simple search and a small bit of effort!

Image 2 is the better image here. Image 1 lacks any sort of background; can you imagine how ugly and unattractive that plain white background looks on Image 1? That sort of thing belongs in the appearance section, not an infobox.

Image 2 on the other hand is formatted almost perfectly, has a background that doesn't take away from the appearance of the character as a whole, and is well proportioned and very suitable to be placed inside of an infobox. And because this is One Piece, I'm sure you could somehow find a way to justify the Saiyan armor.