The Yonko are a pirate group, hailed by the World Government as the four most notorious and most powerful Pirate Captains in the entire World. However, they are neither allies nor enemies of one another, preferring to remain independent under most circumstances. These four individually reside within the second half of the Grand Line, known as the New World, exerting impressive influence and control over dozens of other pirate crews and self-governing islands.

Recently, three of the Yonko, Legs, Daikaku and Baron, have been seeking to dethrone their fourth member, Shiguma, instigating myriads of conflicts between their associates. The resulting war ends up taking three of them off their spots, Shiguma, Daikaku, and Baron, completely unbalancing the world powers. Since then, several new emperors have arisen to fill this void, and the world powers have once again shifted.

As an entity, the Yonko are one of the Three Great Powers, all of which maintain the balance of the entire world, the others being the Shichibukai and the Marines. Their strength and influence are immense, to the point that they are hailed as Emperors, ruling above all and doing what they want. Individually, they are considered to be the most powerful pirates in the world, while simultaneously amassing a crew powerful on its own. Because of their power, they can declare chosen locations as their own; the mere declaration is often enough for others, both Marines and pirates alike, to acknowledge their authority.

Each of the Yonko possess bounties in the Billions, way bigger than their top subordinates even. While Gilbert D. Bertram of the Xros Pirates has

Unlike what many think, the Yonko are not allied together in any form, compared to the Shichibukai, and follow individual paths. The possibility of two or more of the Yonko forming an alliance is enough of a threat to cause the World Government to panic, . A war between two of the Yonko is considered a terrifying crisis, .

Because of their immense power, it is necessary for factions aiming to oppose them to first strike an alliance with other factions in order to bring the Yonko down. However, even with multiple alliances among powerful pirates, the chances of defeating a Yonko are still extremely low.

Much like stated before, the Yonko are not only powerful as individuals, they have also gathered a considerate amount of powerful pirates, all of whom follow them. Most of these Pirates make up for the elite of the New World, earning themselves some of the highest bounties in the whole planet, as shown with Raptor D. Circus'

987,000,000, both being from different crews. They are among the warriors capable of fighting with other elite of the Three Great Powers.

In the New World, many consider there to be only two ways of living, or even surviving, that would be: constantly fight back against a Yonko or become their subordinate.

All the Yonko have different ways of increasing their military power, Legs uses her charisma and ideals, Baron adopts pirates as if they were family, and so on. Regardless, they possess size-able crews under their wing, along with their own army. Legs' army, when coupled with the warriors of Wano, is said to surpass the hundred thousand mark; Baron has a considerable amount of affiliate crews; Daikaku's subdivisions gather together many different fighters, such as Devil Fruit users, Swordsmen, different races.

All of the Yonko give certain names to these elite pirates in their crew:

Much like countries or, rather, Empires, the Yonko possess unfathomable reach when it comes to the importance of their actions.

They have the greatest territories within the Grand Line as a whole, declared as their own based on their sheer power, something that often keeps other Pirate Crews or groups from meddling with the location. These places are known for their extremely heavy security and for actually harboring many citizens, who find themselves living under the Yonko's protection, be it willingly or not. Most of the Yonko have people in their crew that greatly aid managing these territories: the Black Widow Pirates have the Empire side of the crew; the Monk Pirates possess the Wild Cards.

Yonko aren't Yonko solely by themselves, as they are backed up by their crews. However, unsurprisingly and individually, they are extremely important to their crew, such that the death of one could cause the entire collapse of the crew.

Main article: A Prelude To Greatness

Main article: Across the Line

Across the Line Arc

Main article: Across the Line

Out of the Loop Arc

Main article: Out of the Loop

The bounties of the Yonko. 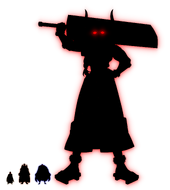 The previous trio compared to Koyuki.